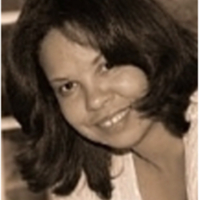 Sophia Lacroix is a self-taught artist born and raised in Port-au-Prince, Haiti in 1969. She relocated to Miami at the age of fifteen, I migrated from Haiti to the United States where I have since resided. She has exhibited in group and solo shows in cities throughout the eastern and central United States, including New York, New Orleans, Atlanta, Chicago, Dallas, Tallahassee, Orlando, Palm Beach, Fort Lauderdale, and Miami. Her work is included in several magazines, books and newspaper articles, including the book published in 2009 “Here, There... and Beyond: The Work of 16 Haitian Artists of Florida”. In 2007, she was named“Artist of the Year” by the City of North Miami, in celebration of The Seventh Haitian Cultural Heritage Month Celebration. She had a show at the Museum of Contemporary Art (MOCA) in North Miami, and received several awards including one from U.S. Congressman Kendrick Meek. In 2008, Lacroix was one of six artists selected and commissioned by the City of Miami to create a mural for the new Little Haiti Cultural Complex.