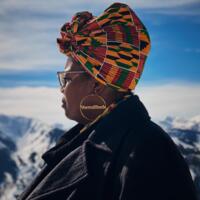 Artist Chire “VantaBlack” Regans’ art practice exists at the intersection of social justice and storytelling. Her work responds to urgent societal concerns and functions as a critical platform to amplify the voices of the communities she engages with. Over the past decade, Chire’s work has focused primarily on community advocacy and depicting social narratives without distortion, in a variety of mediums. As a Saint Louis native, the birth of the Black Lives Matter movement triggered a sense of urgency in her art practice and it has continued to expand, allowing for a wider range of social accessibility and creative scale. In South Florida, Chire continues to marry her artistic practice with community-led activism, emphasizing the art of storytelling as a means of engaging with communities with radical empathy and transparency. Chire was born in Saint Louis, Missouri, and relocated to Miami in the late 1980s. She studied at New World School of the Arts in the mid-90s and graduated from Florida A&M University in 2005. Chire serves on the Miami Dade County Community Relations Board's Criminal Justice and Law Enforcement Committee and was the Fall 2020 Artist-in-Residence with the Community Justice Project.

Chire has received critical recognition for her work in advancing social justice and racial equity. In 2020, she received The Ellies Social Justice Award from Oolite Arts and was recognized as the Best Visual Artist by the Miami New Times. Recently, in 2021, she was awarded a prize for her leadership and activism from The Miami Foundation’s Racial Equity Fund.